Places to see in Pondicherry 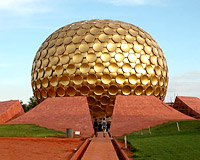 Very cosmopolitan, Pondicherry is one of the most sought after tourist destinations with stunning beaches, a variety of places of sightseeing and tantalizing French cuisines. An ideal abode of peace and resplendence, the place harbours some of the major tourist spots of the country. Find out more about its various tourist attractions that can be included in the sightseeing tours to the place.

Shri Aurobindo Ashram
This ashram is dedicated to Shri Aurobindo, the great revolutionary and spiritualist of the 19th century India and the Mother (Mirra Alfassa, a French woman who accepted Aurobindo as her spiritual mentor and guide and later became his most important disciple) and houses their mortal remains or "samadhis". It is a centre for the practice of internal yoga and has been instrumental in creating the spiritual feel in the city.

Auroville
Auroville is located about 10 km north of Pondicherry. It is meant to be a universal town where men and women of all countries are able to live in peace and harmony, irrespective of their nationalities, faiths and beliefs. The purpose of Auroville is to realize human unity and was started in 1968 by Mirra Alfassa, a French woman who accepted Aurobindo Ghosh as her spiritual mentor and guide and later became his most important disciple.

Arikamedu
Located at a distance of 6 km from Pondicherry, Arikamedu is situated at the estuary of the River Ariyankuppam. Arikamedu is an archaeological site where Mortimer Wheeler conducted his acclaimed excavation in the 1940s. According to him, Arikamedu was a Tamil fishing village which was previously a major port dedicated to bead making and trading with Roman traders. It also has an Archaeological Museum which exhibits a fine sculpture gallery and archaeological findings dating back to the Roman settlement at Arikamedu. There is also a section which charts the history of the colony under the French.

Pondicherry Beach
This 1.5 km long promenade of the Pondicherry beach with several landmarks like the statues of Mahatma Gandhi and the famous French Governor Dupleix, the 27 metres tall lighthouse and the elegant war memorial erected by the French is a major delightful attraction of Pondicherry. 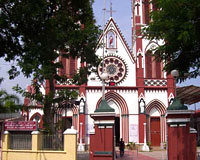 The Government Park or Bharati Park is known for its beautiful lush trees and is located in the green centre of the French Town. This park is the most appreciated public area in the town and is a popular picnic destination of the families. It is also well known for the attractive monument of "Aayi Mandapam" which was built in the 16th century during the period of Napoleon III in France. This structure is named after a renowned courtesan named Aay

There are numerous churches in Pondicherry that are worth visiting. Few of the most popular are:

Eglise De Sacre Coeur De Jesus-This famous church was built in the Gothic style and is dedicated to the Sacred Heart of Jesus. It is located on the South Boulevard in Pondicherry and has stained glass panes which depict the entire life of Jesus Christ.

Eglise de Notre Dame des Anges-This church is located on Rue Dumas and was built in 1865. It has a beautiful oil painting of "Our Lady of Assumption" that was donated by Napoleon III.

Sri Gokilambal Thirukameshwara Temple
Sri Gokilambal Thirukameshwara Temple at Villianur is just ten kilometres away from Pondicherry. It is a very old and beautiful temple dedicated to Lord Shiva. The name of the god is "Thirukameswarar" and the name of goddess is "Gokilambal". The annual temple car festival is held on full moon day in the month of May-June and attracts a large number of devotees.

Botanical Garden
Pondicherry in general has a very fertile soil, and boasts of one of the finest botanical gardens in the country. The origin of the Botanical gardens dates back to 1826 and is home to several species of rare and beautiful trees and plants. This place is a delight for nature lovers.