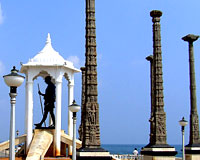 Pondicherry is a Union Territory of India that comprises of four coastal regions viz- Pondicherry, Karaikal, Mahe and Yanam. Pondicherry and Karaikal are situated on the east coasts in Tamil Nadu, Yanam in Andhra Pradesh and Mahe on the west coast in Kerala. In September 2006, the territory and the city changed its official name from Pondicherry to the native original, Puducherry, which means "New village". It is located on the Coromandel Coast of the Bay of Bengal, about 162 km south of Chennai.

A French colony in the past, Pondicherry exudes an enchanting aura steeped in medieval French traditions. It is also known as "The French Riviera of the East". This French heritage is evident in the well-planned town, neatly laid roads, wide and vibrant beaches, beautiful promenades, architecturally imposing churches and public buildings, and the statues of Joan of Arc and Joseph Francois Duplex - the renowned French Governor in India during the period 1742 - 1754. The official languages of Pondicherry are Tamil, Telugu, Malayalam and French while English is also used for convenience.

Pondicherry has a lot of tourist places to see. One of the most popular attractions is the Ashram of Aurobindo Ghosh, the great revolutionary and spiritualist of the 19th century India. This ashram is a centre for the practice of internal yoga and also houses the mortal remains or "samadhis" of Sri Aurobindo and the Mother. The Pondicherry Museum is another important place to visit as it exhibits a fine sculpture gallery and archaeological findings dating back to the Roman settlement at Arikamedu. The 1.5 km long promenade of the Pondicherry beach with several landmarks like the statues of Mahatma Gandhi and the famous French Governor Dupleix etc. is a major attraction of Pondicherry.

Pondicherry's climate is typical of the climate of South India at large. The weather is usually hot and humid; therefore cotton clothing is apt throughout the year. The best time to visit the place is from December to February. Pondicherry is particularly famous for its pottery, handmade paper, leather, aromatics and so on. The shopping experience here is particularly a pleasant one as the prices are quite reasonable as the taxes levied are extremely low. Altogether it is a fabulous place to visit and have a good time.